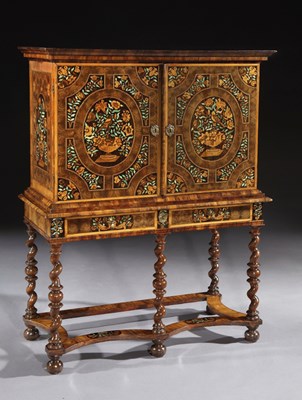 riadmin2021-04-13T10:42:18+01:00
Kensington Church Street dealer Rolleston recently sold a William and Mary cabinet to an international museum for a mid-six-figure sum. The c. 1690 oyster veneered olive wood cabinet features fine walnut marquetry and the gallery’s Camilla Rolleston Pinsent said of the piece: “It is important because of the exceptional craftsmanship of the marquetry, the vibrancy of the colours and the wonderful condition of the piece which retains its original stand. “The piece is certainly the equal to any of the finest examples of late 17th century marquetry furniture in private or public hands around the world.” Cabinet sales   The sale coincided with BADA 2017, where Rolleston took a stand, though the sale was not connected with the fair. However, another cabinet that was sold at the fair was a George I japanned bureau cabinet, which also went for a six-figure sum, at the stand of Godson & Coles. The George I period double domed cabinet is dated to c. 1720 and is attributed to John Belchier. It is lavishly decorated in scarlet and gilt with scenes of figures, foliage and birds and a similar example can be seen at Erddig, now owned by the National Trust.
By riadminFurniture, Cabinets, George I, 17th Century, National TrustComments Off
Read more...