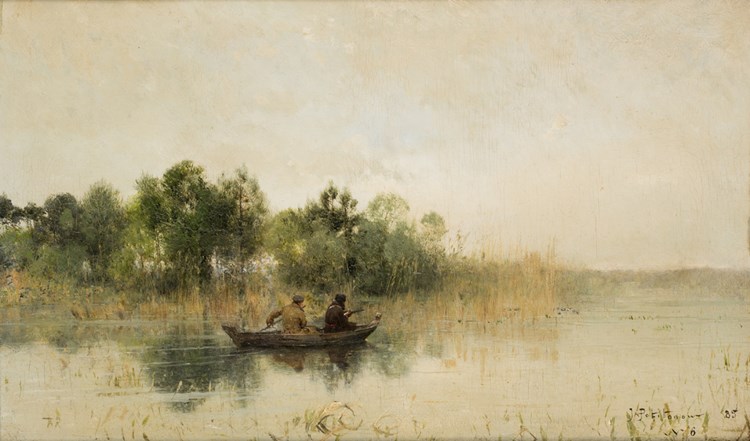 riadmin2020-09-30T15:21:55+01:00
By riadmin Art Comments Off on Painting by Russian artist Pokhitonov among auction lots from private London club

A private members’ club in London is selling a collection of paintings that once hung on the walls of its grand dining room, drawing room and corridors.

The 140 pictures will be offered for sale by Harry Moore-Gwyn at 25 Blythe Road’s British and Continental Pictures auction on April 5. The collection comprises a range of Victorian pictures by artists including Charles Napier Hemy and Sir Joseph Noel Paton. However the highlight of the sale is a work by Russian artist Ivan Pavlovich Pokhitonov (1851-1924), carrying an estimate of £60,000-£80,000.

Pokhitonov’s Duck Hunters on a Lake (1885) is typical of the hunting and shooting scenes that the artist is known for. Pokhitonov expert Olivier Bertrand has confirmed the authenticity of this work and its inclusion in his catalogue raisonné. A significant number of the paintings from the club feature animals, in keeping with the traditional pursuits of the gentleman’s club members of hunting and shooting. The sale includes around 25 pictures of dogs, more than 10 equestrian pictures and a number of 19th century oil paintings of rabbits, foxes and stags.